No sign of holidays around here! Money doesn’t sleep – and doesn’t take vacations. That’s why this July we’ve published several new features for document handling in GetMyInvoices. A few of those are part of the new Workflow features. But let’s take it one step at a time…

An important novelty is our inline processing of documents. Users can make modifications directly in list view. With just a click, date, document number and amount, for example, can be altered. The usual options under “Edit Document” are also still available.

The second novelty is a protocol function for documents. It indicates when a document was imported through which channel, and displays all alterations. Thus, it can be seen, for example, who changed what, and when. This function is also the first new feature of the GetMyInvoices Workflow Module – which, in turn, comprises many smaller features that will be released in the next weeks.

As another part of our Workflow, there will be a function to enable payments directly from GetMyInvoices. As a precursor to this, users can, with immediate effect, download a SEPA XML. This is a defined file format you can upload during online banking, which will trigger a credit transfer or a direct debit.

A further component of the Workflow features is the consideration of the directory scheme – an option requested by many users, which we now have implemented. Hence it is now possible, during the document export to document storage facilities like Dropbox, to specify the individual directory scheme under “Extended Settings” when saving, and to choose a path according to the individually established structure.

Also new: a feature for the sharing of documents. In all views, users can generate a temporary link for forwarding, using a share button. This would enable the accounting department, for example, to simply send a staff member in distributions, who doesn’t have access to GetMyInvoices, a link to his travel expenses report, accompanied by a question to be resolved. 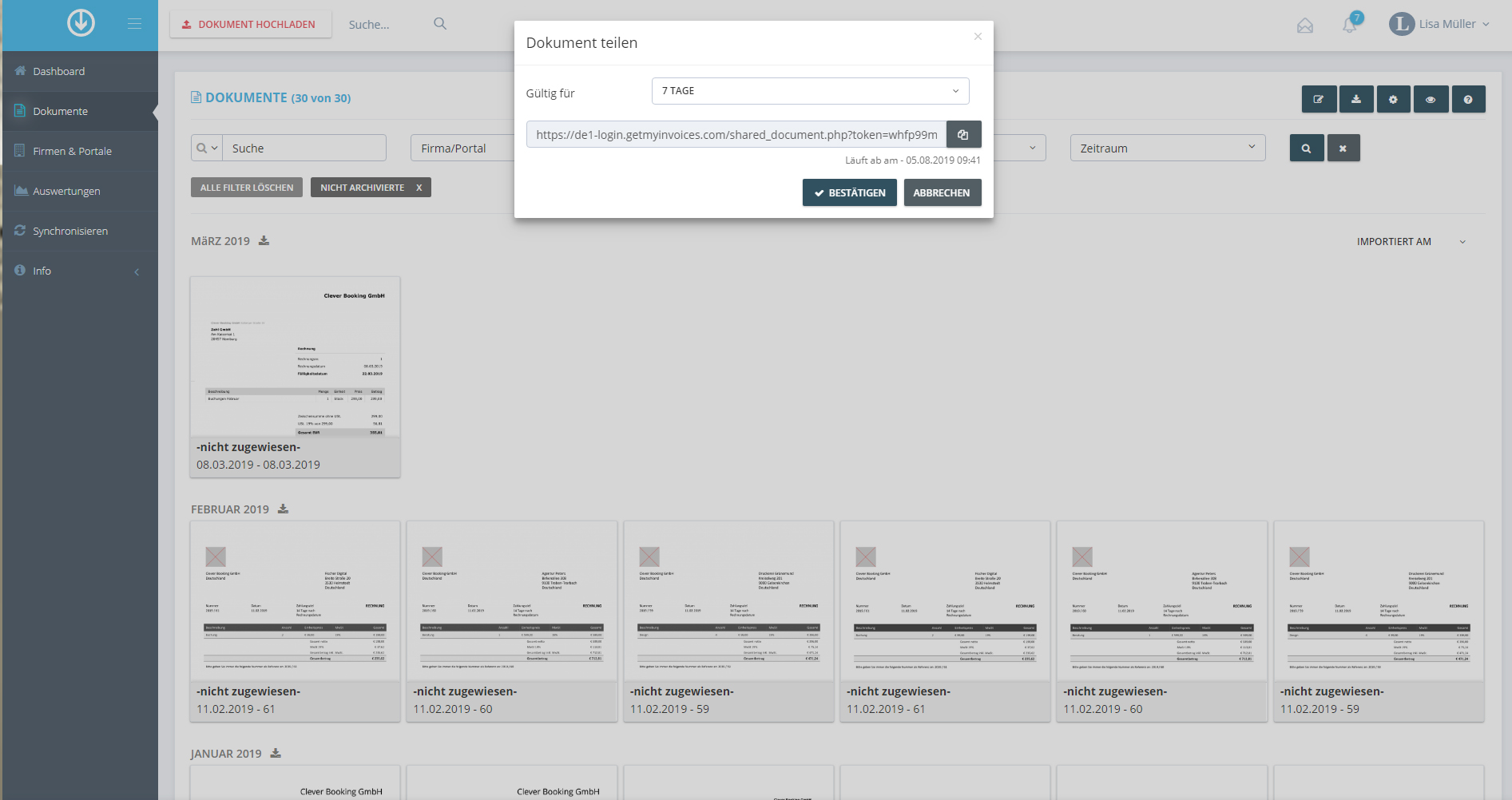 Even better communication to the DATEV computer centre has arrived, too. Users now don’t have to manually initiate the transmission of receipts to DATEV anymore – the required documents can be transmitted via a long-term token, fully automated.

As well as all that, GetMyInvoices closed two new synchronization partnership deals. As of now, we cooperate with d.velop and automatically transfer documents to foxdox. This is a solution enabling users to save, manage and edit documents, media and other contents. Our second new partner is JustOn, a leading provider for automated invoice processing on the Salesforce platform. Via a connector, documents created in the invoicing software JustOn Billing & Invoice Management can be exported to GetMyInvoices. From there, they can be automatically transmitted to numerous other solutions, as described in the corresponding press release.

This month, again, we integrated further portals for the automated import of documents in GetMyInvoices. These include:

Top
We use cookies to give you the best experience when you visit our website. By continuing to use the site you agree to its use of cookies. More information